It’s difficult to get the spot just right. A couple of centimetres to the right, and reception is lost. The phone needs to be propped up at exactly the right angle, on top of a toilet roll which sits on top of a drawer, held upright by the roof of the yurt, or ger. When Battsetseg wants to call her daughter, she stands on her toes and uses both hands to hold the phone in place while she scrolls through the contact list. Then presses the green button on her old Nokia and, once Burmaa picks up, starts yelling so her daughter can hear her.

Battsetseg lives in Terelj national park, about 2.5 by car from Ulan Bator, in Mongolia. She is of that undefinable age that comes with hard manual labor and a lot of time spent outdoors. Battsetseg and her husband Bolt have two children, two grandchildren, 12 cows, 7 calfs, 3 oxen and carts, plus a few horses. The animals were the basis of their livelihood for a long time. Until the phone came along.

“I use it to call the business. And my neighbors, before I take the tourists to their ger,” she says. We communicate with lots of gestures and a few words of English. Since getting the phone, Battsetseg became part of a group of herders that hosts tourists in search of a taste of real Mongolian nomad life. Like me. “Before, only cows and horses. Now, tourists, yes!” Battsetseg’s “business,” a charity based in Ulan Bator, arranges for the home stays and the transport to the national park. Then they stay for a night or two at a family’s home, before they are transported by horse or ox cart to their next hosts’ yurt. All of that is arranged through a network of quite unreliable, old Nokia phones. However, it is reliable enough to bring a whole new source of income to the region. 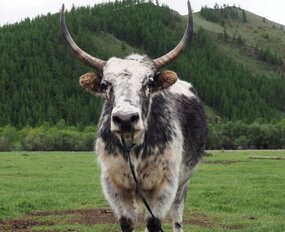 First, there were only oxen… 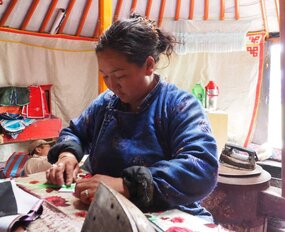 … but thanks to the phone Battsetseg now hosts tourists.

As one of the least densely populated countries in the world, Mongolia has long had problems building up a reliable telecommunications network for all its citizens. Like much of the developing world, it has skipped fixed-lines and landed straight in the mobile age. Mongolia’s communication authority is concentrating on building cell phone base stations to cover all of the countries district. Additionally, Mongolia has used Wireless Local Loop (WLL) technology to bring phone services and potentially internet to rural areas. WLL provides an experience resembling land lines but uses cell phone technology. While Battsetseg relies on her Nokia, her daughter Burmaa has access to one of those “land line” phones which she says is more reliable; like her mother, she powers it through a large solar panel propped up outside her ger.

Burmaa also shows me the widescreen TV she’s been able to buy with the extra income she makes with tourism. Her 4-year old son is glued to the screen, watching a subtitled Chinese soap opera on one of the 138 Mongolian television stations. In terms of media choice, Mongolia has left it’s communist past behind and embraced freedom of speech, rising in just 3 years from No. 100 on Reporters without Borders’ “World Freedom Index” to No. 54 in 2015. However, this quality of programming doesn’t necessarily reflect that. 80% of stations were founded in the last 10 years, by wealthy businesspeople and politicians hoping to broadcast their message. Journalistic standards are low, with pirated content and advertising in disguise making up much of the content on offer.

For Burmaa and her son, all of this is secondary. “He loves it!” She strokes his hair, and with the other hand lifts the receiver to call her neighbours, and tell them that the German tourist is on the way to their ger. This phone sat her family on a path towards a brighter future, one lit by a 40 inch television screen.